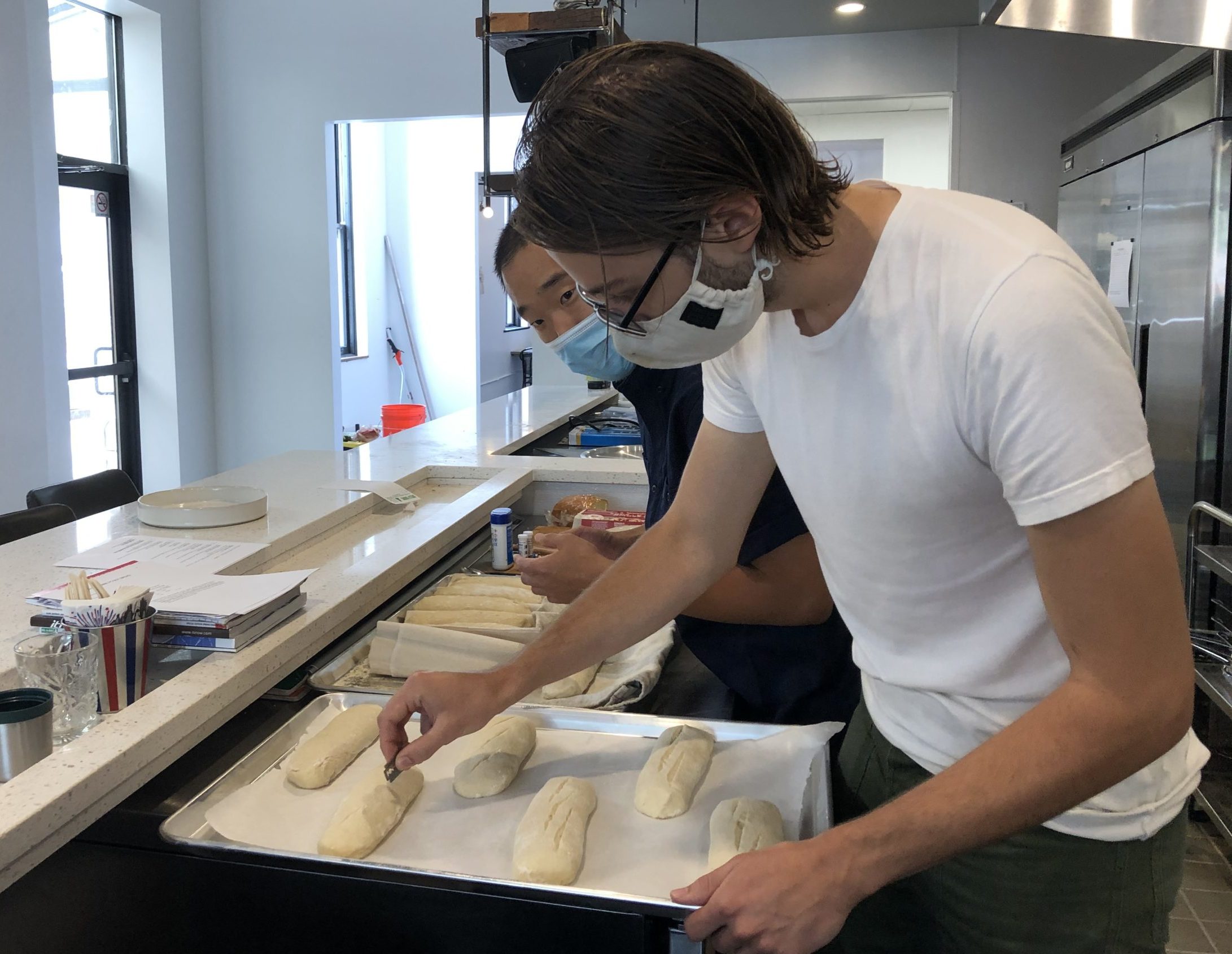 Given that we are going to start selling our Ypsilanti Rye this weekend, I thought I’d ask Bellflower baker Colin Hoard how the loaf came to be, and what sets it apart. Here’s our conversation. If, after reading it, you have any questions about the Bellflower bakery program, drop us a line at hello@bellflowerypsi.com. [above: Hoard working alongside Bellflower chef and co-owner Dan Klenotic]

MARK: OK, let’s talk about the rye that we’re using in our Ypsilanti Rye loaves here at Bellflower. Where’s it from?

COLIN: The rye, as well as the spelt flour, in our Ypsi Rye loaves comes from Hampshire Farms in Kingston, Michigan. Hampshire Farms is a small family farm that is certified organic and primarily produces grain and beans. The owners, Randy and Shirley, mill their own grain into flour on-site and use it to bake bread out of the wood-fired brick oven on their farm that they built in 1991. I have a high regard for them and their work, I also love to work with their stone-milled flour.

MARK: I believe we’re using the same sourdough starter to naturally leaven the Ypsilanti Rye that we use to make our milk bread, right? Assuming that’s the case, what can you tell us about the mother we’ve built our bread program around?

COLIN: I actually converted some of our sourdough mother that we use primarily for our milk bread into a whole grain rye sourdough starter that I now propagate only with rye flour. Doing this allows for the rye loaves to stay 100% whole grain. In my experience, sourdough starters fed with whole grains impart a deeper flavor than those fed with refined grain.

MARK: In what other ways is our Ypsilanti Rye unique with regard to other local rye loaves that people might be acquainted with?

COLIN: One thing that makes a big difference is that this bread has a relatively high hydration percentage, which gives it a much more moist and tender crumb. Rye gets a bad rap because, when most people think of it, they conjure up images of extremely dry loaves of shelf stable, caraway-tinged and unnaturally dark sandwich bread. This is unfortunate to me; before I started really getting into researching and baking with this specific grain, I thought the same thing. But there’s much more to it than that. Rye can attain a much different and more complex flavor profile than what can be achieved with most other grains.

MARK: Why was it that we decided to produce Ypsilanti Rye in a pullman pan?

COLIN: Right now, we don’t have a proper bread oven at Bellflower, which presents something of a challenge for producing bread on any scale. In bread baking, steam is a very important variable to have control over, and in a typical convection or conventional oven, trapping steam in a way that is beneficial for bread is difficult to achieve. To get around this, bread has to be baked in a sealed environment inside of the oven in order to trap steam for the loaves to properly rise. That’s where pullman pans come in handy, a pullman pan is a straight-sided loaf pan that can be affixed with a lid, allowing for the steam that is released by dough itself during baking to be trapped and provides a moist environment inside the pan appropriate for bread.

MARK: We’re selling our Ypsilanti Rye now at Argus Farm Stop in Ann Arbor, and here at Bellflower in Ypsi. What’s our production schedule like? Right now, are we just selling on Sundays?

COLIN: For the time being, we are only producing loaves to sell on Sundays. Depending on the response from the community, volume and frequency of production can, and will, change.

MARK: I believe, in a conversation I had with you not too long ago, you mentioned how surprised you were about the shelf life of this particular loaf, and the way that it aged. Can you talk a bit about that?

COLIN: Because this bread is sourdough fermented, and is made from freshly milled whole grain, it has a staying power that is admirable to say the least.

MARK: Assuming you’ve taken a loaf of Ypsilanti Rye home, how have you eaten it?

COLIN: If I’m being completely honest, the way I eat this bread most often would have to be cutting a thick slice and eating it plain, unadorned. I’ll often wrap a piece in cloth and stick it in my backpack to eat later in the day, it travels very well. One of my favorite things to do with it is to take it on a picnic, as it goes well with soft-ripened cheese, cured meat, and a glass of wine.

MARK: One last thing… When I was initially introduced to you, the very first thing I was told — I think before I was even told your name — was that you had an intense fondness for rye. What is it about rye that interests you?

COLIN: Rye for me was the gateway into a deep interest in the process of bread making. When it comes to baking, rye is in a category unto itself. Rye acts differently than wheat in fundamental ways that directly affect how it’s handled, stored, and consumed. I started researching traditional European bread making methods, and that was when I really began to find interest in the functions and properties of the grain. There are so many different techniques and little interesting things that are unique to rye baking, and they have held my focus for a long time.

Rye has taught me to appreciate whole grains in general. At the restaurant I use various whole grain flours as a substitute for refined flour whenever possible. I love the flavor and the specific functions that utilizing different whole grains can provide to bread and pastry. In baking, using whole grains continually opens more and more doors in terms of technique, practices, and intrigue. Finding the right grain for different applications is an exciting and consuming way to go about baking.