Bellflower: Collaborative, Culinary Passion and Ypsi Pride in the Toughest of Times 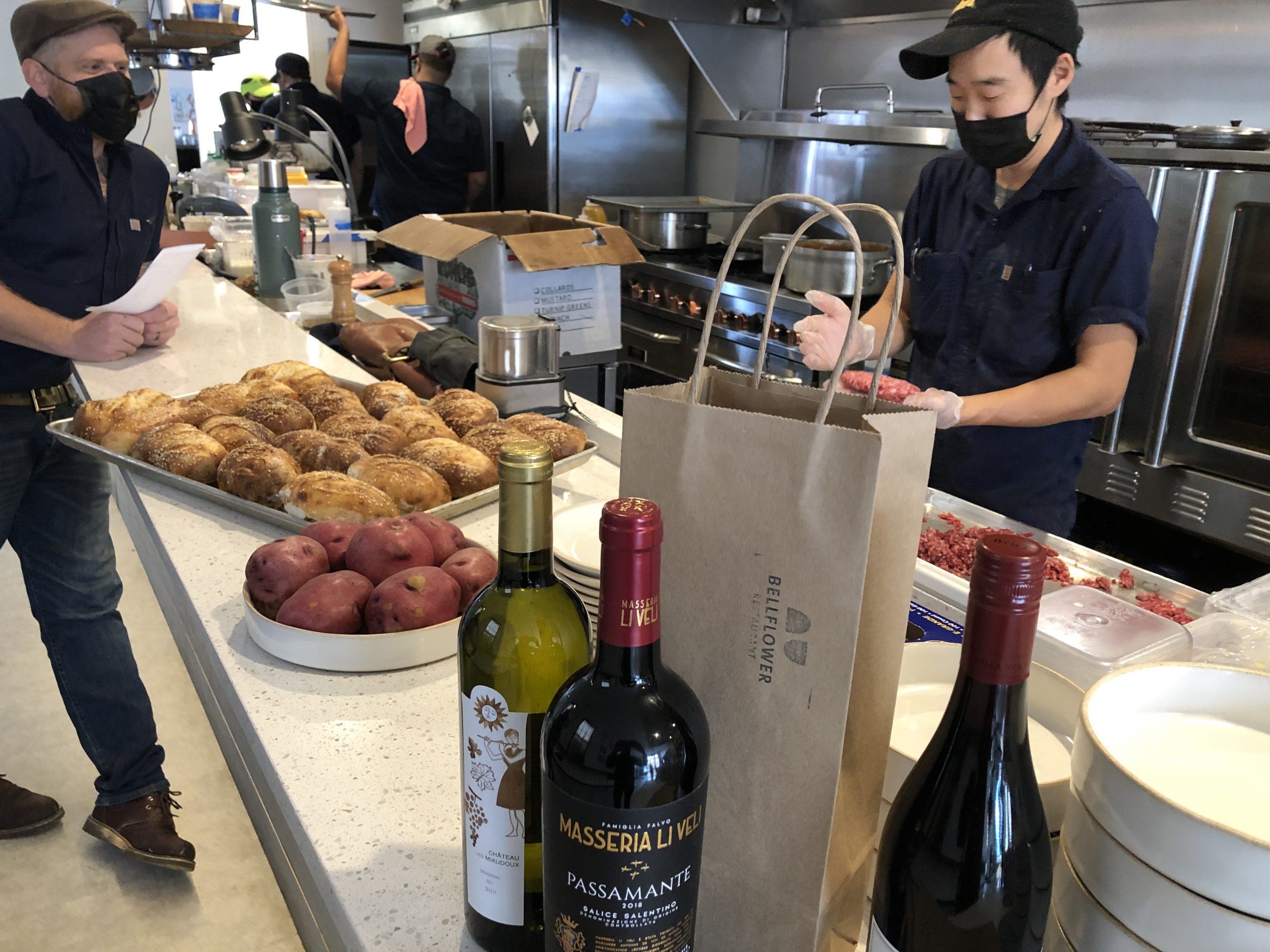 Not too long after we opened, local writer M.F. Dibella came out to Bellflower to check out what we were doing. Here’s what he wrote for the Current…

Think back to the glimmering days of early 2020 BC (Before Covid). A time without PPE and social distancing; a bygone era where you could sit down at a bar or restaurant with friends and family without a heightened sense of impending doom (granted, not really possible since November 2016). It’s abundantly difficult to recreate that old feeling of a (relatively) carefree night out at present, but the good people at Bellflower in the heart of downtown Ypsi are doing their best to offer some neighborhood comfort and joy.

The space on 209 Pearl Street was a Michigan Bell Telephone exchange outpost from the mid-1920’s until 1964 when MichBell sold the property to a landlord who turned it into a rooming house. The rooming house was shuttered in 2014 after sustaining fire damage and the building remained largely vacant until 2016.

Current reached Maynard for comment on the state-guideline-adherent patio of this elegant (and dare we say, romantic) space directly across from the Ypsi bus station. Both parties wore masks, for the record.

At first glance, Bellflower appears to be a rather deliberate nod to New Orleans cuisine; the lunch menu features seafood (and some vegetarian) po’boys, an Italian muffaletta sandwich, red beans and rice, and a chef’s rotating gumbo dish. The first iterations of the dinner menu were also NOLA-inspired including roasted oysters, chilled gulf shrimp, whole hot fish and boudin sausage.

But Maynard assures that New Orleans-style cuisine was “just a jumping-off place” for the restaurant: “At the outset, our primary objective was to have a sandwich shop in the front of the space…somewhere that we could interact more easily with the community, introducing them to what we were hoping to build here in an approachable way. And we started talking about the sandwiches that we loved, and where we thought there might be a niche in the community that wasn’t being filled.” And that quest led them to po’boys, which, in turn, led to a restaurant menu leaning heavily on oysters and seafood. Maynard is quick to point out, however, that they aspire to be more than a New Orleans-influenced restaurant.

Klenotic’s interests, he says, are too broad. “Dan has an interest in exploring our shared culinary history,” and how it’s changed over time, as the melting pot of America has incorporated the flavors brought here. “The Gulf region is a great, and logical, starting point for that exploration, but Dan’s insistent on following ‘the spice trail’ in every possible direction,” Maynard says. And this exploration has already led to some incredible places. Take Klenotic’s Japanese-influneced milk bread recipe, for instance, which serves as the foundation for Bellflower’s po’boys (for which two in-house bakers make 100 loaves daily; typically sold out by the end of lunch rush). “It’s not traditional po’boy bread,” says Maynard. “It’s not what you’d expect, but it really works.”

Says Maynard: “If you look geographically, one of the hot spots for that (spice trail) is the Gulf region because you had so many different flavors coming in from different parts of the world that were kind of colliding there, and that’s the spirit we’re going for. We want deep flavors that reflect the complexity of our shared history.”

The kitchen concept is simply not going to be confined to one region or influence though. Maynard elaborates: “…We like the flavors of the Gulf region, but Dan’s vision was always, ‘We’ll build a team in the kitchen and we’ll start seeing where different people’s passions take them’.” Expect more “steaks, chops, and baked goods” in the coming months and a willingness to collaboratively serve the community’s wishes on where the menu will go.

There’s plenty of attention to detail on the beverage side of Bellflower’s operation as well. A selection of intriguing craft cocktails, absinthe, sake, Armagnac, beer for any taste, and diverse wines available by the glass, bottle, or retail (25% discount).

Thus far, the layout has proven to be Corona-friendly during the late summer and fall months. The patio has three 6-top tables and two 2-tops and the open-air awning area is a nice setting for groups of two or more — all carefully and comfortably socially distanced. Sustaining through COVID winter is going to be a daunting task for any business, but Bellflower is tip-toeing towards full indoor dining by offering a small sit-down bar service (three small groups at a time). The goal is to be able to serve “32 patrons at a time indoors once winter hits.”

Retail bread will be available in October and there’s outreach with a baking program in the works. Bellflower seeks to build community in a time of general isolation with an affordable yet elevated dining experience and a spirit that reaches for a deep bond with the uniquely vibrant soul of Ypsilanti. Maynard punctuates Bellflower’s mission statement: “It’s fun to see where this is headed… we’re gonna make it really f***ing cool all the time… we’re gonna keep people coming back and we’re gonna try to grow something good here.”